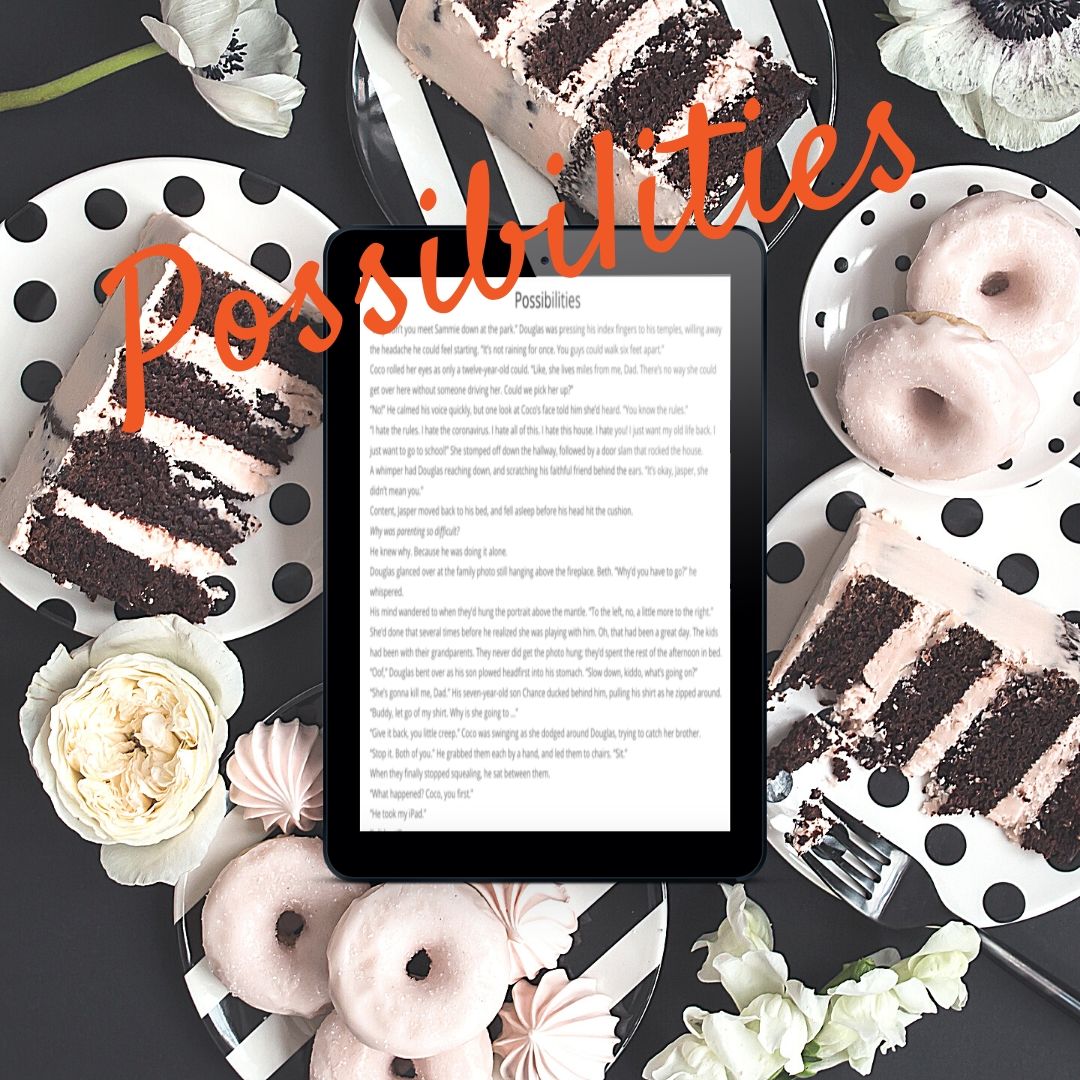 Haven’t read the first chapter yet? Read it here.

Douglas zipped down the aisles of his local grocery store. He had a list, and was trying to see how fast he could get through it. He hated shopping, more so now with the six-foot rule.
He maneuvered his cart into the bakery, looking for a loaf of bread, and came to a stop in front of a display of cupcakes. There were four to a package, each decorated in vibrant colors, with a small happy birthday balloon tied to the box. He picked one up; cute, pink and frilly. He grinned. It was the perfect thing for a forty-year-old who couldn’t go to Mexico.
He dropped it into the cart, imagining the look on her face when she opened her door and found it sitting, waiting for her.
She had a great smile. And she looked really good in that dress. Her bare feet tapping out a beat. Her hips swaying back and …
Since when had he started thinking about Sara?
They’d lived next to one another for six years.
They weren’t close. They’d said hi enough. Chatted occasionally. But they didn’t socialize.
Their kids were different ages, doing different things. They didn’t hang out in the same circle of friends, and with busy lives, they’d never had much contact other than the occasional “hi.”
He hadn’t looked at another woman since losing his wife to cancer two years before. Beth had been his everything. They’d been good together, looking forward to a long life. Then cancer took it all away.
Not that he was looking at Sara like that. He wasn’t. Was he?
She did look good in that dress, twirling around on her patio. Drinking a rum margarita. Why shouldn’t he notice?
He couldn’t help it. He bit back a smile. And realized he hadn’t smiled in a very long time.
They were neighbors. Of course, they should chat and be nice to one another. Especially now, in the middle of a pandemic.
She was making the best of a bad situation. He should too.
If you only have rum in the house, why not have a rum margarita? It worked for him.
Why not a proper birthday cake?
He looked at the cupcake box one more time. Why not, indeed?

After unpacking the groceries and putting everything into its proper place, he picked up the cupcakes and headed out the back door. The kids were watching a movie. That gave him a few minutes of freedom to make a delivery.
Sara wasn’t outside. But the kitchen light was on.
He strode over, placed the bag by the back door, knocked, and ran back to his property.
He turned just as she stuck her head out the door.
She glanced around, then down, stepping out and looked into the bag.
“I thought you needed a proper birthday cake. I found that at the store.”
She grinned, bent over and pulled it out of the bag. “I love it! Thank you.”
“You’re welcome.”
He watched as she opened up the box and stuck her finger in the frosting. She licked it off and sighed.
He swallowed, feeling a pull he hadn’t felt in a long time.
She was back to her yoga pants. But she had an old sweatshirt hanging off her shoulder. Her hair was piled on her head, with loose strands curling around her face.
He’d never realized how beautiful she was.
She removed a cupcake from the box, peeled back the paper, and took a big bite. He could tell there was frosting on her upper lip.
She grinned. “You have no idea what I endured yesterday. Thank you for this. These are awesome.”
“I’m glad you’re enjoying. Was dinner worse than you thought?”
She shuddered. “So much worse. They added so much salt, we couldn’t even eat the cake. And the nachos …”
“That good?” He covered up his mouth, trying not to laugh.
She finished the last bite, swallowed, and moved a step closer to Douglas. “I’m still debating if they did it on purpose, so I’ll never ask them to make dinner again. How is that even possible? They cook with me all the time.”
“Maybe that should be a homework assignment.”
“I love it! Cooking, I’m adding it to next week’s plans. Thanks, Douglas.”
“Any time.”
He stood watching her. And he noticed that she made no move back towards the door.
He was sick of staying in place. He was tired of living a life half-lived.
He wanted to feel alive again. Maybe that included someone else in his life too.
“Dad!”
He heard his son calling him from somewhere inside his home. He smiled at Sara one last time. “Guess I better go. Enjoy your cupcakes tonight.”
“I will. Don’t tell the boys. I’m going to hide them and keep them all to myself.”
He pretended to lock his lips and throw away the key. “Your secret is safe with me.